Like millions of others, I love bagels. But, for good or bad, I’ve been spoiled by a youth subjected to some of the world’s best bagels – I grew up on the Jersey side of the NYC metro area, arguably an environment of supreme bagel excellence. Frankly, I’d just as soon pass on most of what is sold today in our groceries as bagels – they bring no memory of what I remember as the bagel of my youth, nor do they even stand on their own as a new and worthy separate entity of the baking world – they are simply poor imitations of something almost sacred.

I think most of these imitators fail on several levels: certainly flavor; interior texture is often poor; but most crash most miserably in the attempt to duplicate that divine crust of a great bagel. Nancy Silverton has a beautiful anecdote in her wonderful baking book, “Breads From the La Brea Bakery”, where she quotes her Brooklyn born bagel adviser, Izzy Cohen, whenever he is confronted with a bagel he doesn’t respect – his response?  “Where’s the sugar?” It’s Izzy’s subtle way of suggesting that if it most resembles a donut, it should taste like one too! And I’d add, “And not a good donut either.”

A month or so ago, I noticed a recipe on Susan’s excellent blog, Wild Yeast, for Sourdough Bagels (based on Nancy Silverton’s sourdough bagel recipe in the above book, interestingly). I thought I’d try it, and I did. They came out splendidly, if just a bit dry, which gave me a little trouble when it came time to form them and seal the ends – as all bakers know, all flours differ in their ability to absorb liquids, and therefore your final dough may, or may not, be exactly what the recipe’s author had in mind. Of course, all bakers also know that once you’ve made the same bread several times, you get a sense of how the dough should look and feel at any stage of the process, and you adjust accordingly. I told Susan about my “sealing” problem, and her suggestion was to wet the ends of the bagel “rope” during the forming process. I also told her that since they were so good, I would be making these again soon.

Recently, I pulled out Susan’s Sourdough Bagel recipe for a new batch, and as I reviewed the recipe, I thought, “What if I tried this w/o the yeast – just a pure sourdough recipe?” Now, I still consider myself a novice with sourdough – certainly not a purist – and I have some admittedly strange beliefs about sourdough and its mysteries – one of those strange beliefs is that sourdough alone may not create the necessary rise, and that this is usually the reason why recipes call for the use of both. But that strange belief may be disappearing, as a result of my recent experimentation with some sourdough recipes that literally begin by making a biga with a teaspoon of starter!

Another strange belief/worry is that if I use both commercial and wild yeasts together, that they somehow will fight each other – ??? Whatever! All this is to simply say that I decided to try Susan’s adaption without using any commercial yeast – I guess that makes it, an adaption of an adaption.

Now, if bread baking is a science, then this is a science experiment. I guess if you wanted to, you could simply leave out the commercial yeast in Susan’s recipe, and just follow the instructions as they are. But I worried that w/o the commercial yeast, the process may not include enough time for the wild yeasts to do their thing – so I thought I’d start by mixing the dough and giving it a long refrigerated fermentation before the bagel forming process (which is a change from Susan’s process). But when I pulled the chilled, fermented dough the next day, it had hardly risen at all – so I covered it and allowed it to warm and hopefully rise a little.

I kept an eye on it for the next several hours, knowing that sourdough is slower to rise than is commercial yeast – still it seemed to be taking much longer than I expected – however, I checked my impatience and waited it out. And at about the 8 hour mark, I estimated that it had risen more than double, so I moved it to my board for the forming phase.

Quite a difference between this dough and that of Susan’s process – this dough was soft and easily workable, as opposed to Susan’s stiffer, non-risen dough. Is there a price to be paid for this more workable dough? I’ll leave that to others who may be more discerning than I – but I sure enjoyed the ease of making the bagels in this process – and there was no problem in sealing the newly formed bagels.

Once formed, I moved the bagels to a parchment covered sheet pan, covered them, and allowed them an hour’s final proofing time – finally, I gave them their quick boil, put topping on half, and put them back on their sheet pan for baking.

My favorite part of this bagel is the magnificent crust! I don’t think the crust is any different than when I used Susan’s adaption, but for sure, this is a lighter, less dense bagel – is that good or bad? Again, I’ll leave that to others, but I find it very interesting that a bagel made w/o commercial yeast should be less dense than one made with both yeasts. I think flavor-wise, they are probably equals, but given the fact that commercial yeast has little positive to contribute to flavor, and the extra time the sourdough has to work its magic here, there is an expectation that flavor should improve – again, I’ll defer to others with more discerning taste buds.

If you wish to try my adaption, simply use Susan’s posted recipe on Wild Yeast, and make these few adjustments: 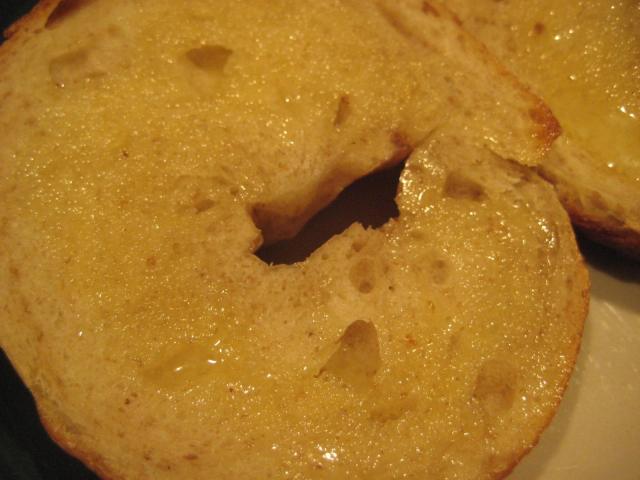 Once baked, let them cool for 30 minutes, and then slice one and enjoy – this is how a bagel is supposed to taste! Now you can be spoiled too.

I’ll be posting this to this coming week’s edition of YeastSpotting (with Susan’s gracious agreement – even though I’m messing with her product here!).

I'm a guy with enough time to do as I please, and that my resources allow. The problem(s) are: I have 100s of interests; I have a short attention span; I have instant expectations; I'm lazy; and I'm broke. But I'm OK with all that, 'cause otherwise I'd be so busy, I'd be dead in a year.
View all posts by drfugawe →
This entry was posted in Baking, Food and tagged bagels, Breads from the La Brea Bakery, commercial yeast, Nancy Silverton, sourdough, sourdough bagels, Wild Yeast, wildyeastblog.com, YeastSpotting. Bookmark the permalink.

6 Responses to An Adaption of an Adaption