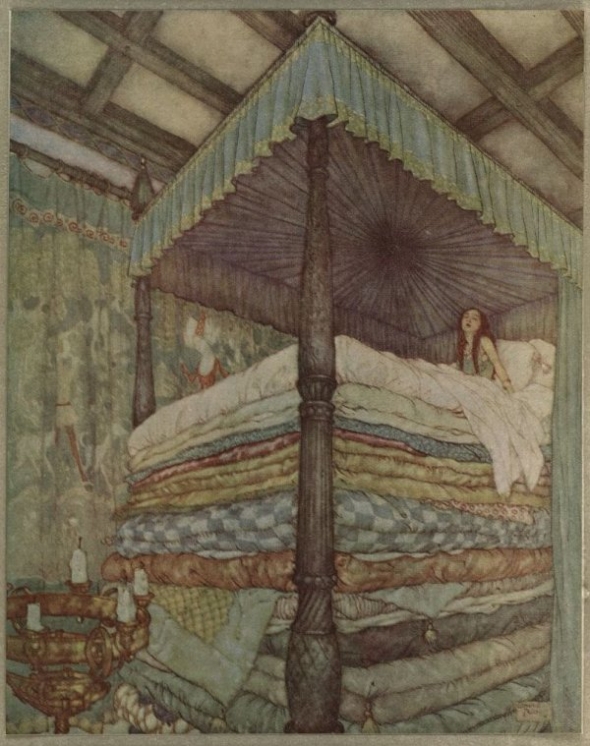 There were two things that my sister and I liked about going to our grandmother’s house in Delaware – and they may have been the only things we liked about it – one was the fact my Gramma Warren (I never remember hearing her first name, my mother simply called her, Mom, or to us, Gramma Warren) loved ice cream more than almost anything else – and when we’d visit, my mother would always send my father out to the corner store to get two quarts, one for Gramma, and the other for us. I always marveled at Gram’s ability to finish off that whole quart well before any of us had finished our paltry shared portions – but I never remember feeling envious, just amazed that a scrawny old lady could actually do such a thing.

The other thing we liked was the huge feather bed in her bedroom – and when I say huge, I mean ridiculously huge. My first memory of the bed was when I was maybe 7 or 8 years old, and I can remember not being able to see over the top of it. Of course, my sister and I had to have a feather bed “experience” each time we visited – but that required using a chair to climb up into it. And once in, you would sink down about a foot or 2 into the mass as it enveloped your entire body – super soft and comfy, but I always thought how I’d never be able to sleep in that thing, for fear of suffocating – and it was simply another thing that amazed me about my Gramma Warren. 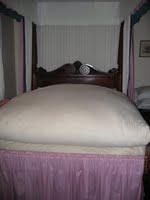 This was more like Gram's feather bed than today's thin, flat ones!

As I recently made my way through some of my old community cookbooks, looking for candidates for America’s Food Secrets, I came on a recipe for “Vermont Feather Beds”, and immediately memories of Gramma’s house and her huge feather bed came rushing back. My first thought was “What a cute name”, and then I took a closer look at the recipe, and was surprised to see that it essentially was a yeast batter muffin, with an overnight “rest” – whoa! Bread bakers would immediately recognize this as a unique animal in the bread world, especially the old American bread world. First, few old yeast breads called for an overnight fermentation or rest, and then, there are not a whole lot of yeast batter muffins – at least not that I’m aware of! A perfect choice for our project.

Now this baby was coming from a strange source – the cookbook was titled, “Casseroles”, and was essentially a collection of 2000 casseroles from American women’s clubs by The Federated Women’s Clubs of America, published in 1970. As I read, I discovered that the reason why a book on casseroles had a section on bread was that during the forties and fifties –the heyday of casseroles in America- housewives were not about to heat up the oven to make just a casserole – as long as it was hot, the oven was used to bake a few loaves of bread too. Besides, casseroles and bread went well together.

Being the curious guy that I am, I spent a good deal of time searching the net for references to Vermont Feather Beds, or just Feather Beds – not a fruitful search! I had to give up on “feather beds” early on, because of the overload of results referencing the sleeping kind of feather beds. “Vermont Feather Beds” never did come up with a hit, and “feather beds, bread” also resulted in a mass of off-target results, but I did find two references to breads simply called, “Feather Beds”, both of which are yeasted batters, but only one notes a long dough rest, and the other suggests using mashed potato and potato water in the dough – I shall try them both, and if either impresses, I shall report back.

Sometimes the internet proves to be a meager source for desired information – or all current net search capabilities are less than advertised – or both! But in this case we at least know that our Feather Beds are not the unique creation of a single baker back in the 60s – in fact, their uniqueness gives them entry into a niche among American breads, and that makes it a worthy candidate for America’s Food Secrets.

Now that I’ve made a case for this bread’s uniqueness, let me dirty the water some, and suggest that there is no reason why Vermont Feather Beds cannot be made as a sourdough bread. Why not? It’s almost perfect, what with its slow fermentation period – so of course, that’s exactly what I did first time I baked these. However, there’s no reason why you shouldn’t try them as a yeasted muffin as well – so the recipe below gives that choice – Your pick.

How’d they turn out? Well, is it enough to say that this is one of the breads I’m going to include at the breakfasts for our Thanksgiving guests this year?  They do look a bit like puffy feather beds, don’t they?  And the texture is light and airy, and all too easy to eat – Bet ‘ya can’t eat just one!

My suggestion – either eat ’em fresh out of the oven, or re-crisped in the oven for a bit, or simply split and toasted – that’s how they’re best.

And of course, these’ll go to Susan at YeastSpotting for this week’s grand collection – hop on over and see what the real bakers are creating for Thanksgiving.

I'm a guy with enough time to do as I please, and that my resources allow. The problem(s) are: I have 100s of interests; I have a short attention span; I have instant expectations; I'm lazy; and I'm broke. But I'm OK with all that, 'cause otherwise I'd be so busy, I'd be dead in a year.
View all posts by drfugawe →
This entry was posted in America's Food Secrets, Baking and tagged America's Food Secrets, Edmund Dulac, feather beds, sourdough batter muffins, The Federated Women's Clubs of America, Vermont Feather Beds, yeasted batter muffins. Bookmark the permalink.