There was a time when I thought I’d like to have a bread blog – that was about 5 years ago – at the time, I was enamored with anything bread, and of course, there was a ton to learn. And how did I go about the task of learning? Well, of course by baking a new kind of bread every time I baked – and what did I learn about baking? I learned that that’s not the way to learn how to bake bread.

You want to learn how to bake bread? Make the same kind of bread every time you bake! That makes sense, doesn’t it! But it’s not the kind of thing that makes for good blog reading – or writing either.

So, I’ve always been kinda glad I didn’t start a bread blog.

Last year, when I took a break from blogging, I found my baking shifted into a different gear – I can’t say the two had any connection, but maybe they did. In any case, I found that I was baking essentially the same kind of bread each time I baked – but each time, I’d make a tiny difference in either process or ingredients – and I’d make a note of it (I hate making notes, always have, always will – but sometimes, it really helps – like when you make tiny changes in your baking, and your brain can no longer remember anything anyway.). And you know what happened? My bread got better and better – and better!

I also learned that if you hit on a good basic formula –which I think I have– you can then learn how to make changes to that formula to make many, many different kinds of breads – so instead of using someone else’s recipe, you are using your own, which carries with it a full awareness of just how this new bread relates to other breads in the family of breads. And this knowledge makes you a better baker.

And so, my journey as a bread baker has moved along to the point where I think I’m ready to do another bread post, which will not only give readers some new knowledge from my own recent experience, but it will give me the pleasure, as a writer, of sharing some info I know is not simply a dup of something I’ve already blogged about – at least, that is my intent.

So, what’s new? I think my recent breads have more flavor than those I’ve previously baked – and I think I know why (this is always very helpful, don’t you think!). And I think this is due to two things: time and nuts. 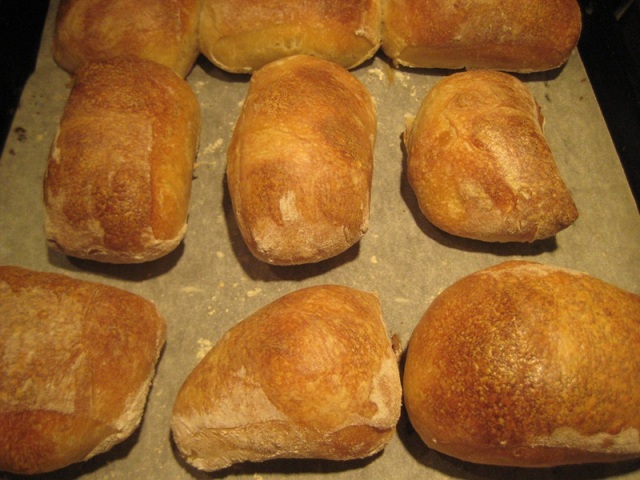 The time thing is nothing new to any of us, for as we all know, time is flavor in bread baking. But, sometimes we are rudely reminded just how true this can be. I am a firm believer in the magic of the preferment, which of course cannot happen without time. My last bake was of some club rolls, for which I used a newly discovered method of forming the rolls – I’ll get to that in a bit – but the reminder of just how magic is the preferment process came as I decided to use only a pinch of yeast, and a tiny pinch at that, to make my preferment. And I share the following in the belief that perhaps you too will find this as amazing as did I.

My basic preferment is a simple one – 14 oz of water, and 8 oz of flour, and in this case, a tiny pinch of yeast. That’s it. A very wet mixture, which I only minimally mix to a state of not being able to see any more dry flour. I made this one in the early morning, put it in a small bowl, and covered it with a towel – there it stayed on my kitchen counter all day. About 9 PM, I gave it a good look and a stir – there was not much evidence that the yeast had started to do much, except that the dough was starting to take on a gelatinous character. I thought about leaving it out on the counter all night, but finally decided to put it into the fridge for an overnight stay (this fridge stay, BTW, is the customary way I treat my usual preferments which generally have more yeast than this one).

The next morning, I pulled the bowl out of the fridge and gave it a stir – much more structure, body and lightness – just what you want in a good preferment. I then proceeded to put together my final bread dough by adding 12 oz more of flour and 2 tsp of salt. If I have a handle on this baker’s percentage thing, that makes this dough a 70% hydration – this is a fairly wet dough then, a perfect candidate for my beloved proofing tub,

which I’m sure I’ve told you about many times before – it makes working with all doughs, but especially the wet ones, so much easier! A simply amazing tool.

But what about the nuts? Is this a nut bread? OK, I’m getting to that – and No, this is not a nut bread, at least not in the classic sense. I’m really talking about all the nut milks that proliferate our groceries today. I have a bit of a lactose problem -as I think all human adults do- and so I’ve tried all the nut milks I can find. I suppose the soy and rice milks are very similar and belong in this grouping too.

These pseudo milks tend to clog the fridge and quickly lead to the question, What else can they be used for? And the answer, of course, is, Anything that real milk is used for. But I’ve discovered that they are especially good for breads – especially coconut and almond milk! And I don’t think its’ my imagination, but I’d swear that the use of the nut milks has increased my bread’s chewiness – a character I love in a roll or sandwich bread.

Finally, the club roll thing. I’ve always liked the looks of what’s known here in the US as a club roll – it has a rectangle shape with a characteristic ‘chopped’ end, evidence that it was cut from a tube of dough, which otherwise would have become a baguette if left whole. I’ve found these easy to do, even with a very wet dough since my current process does not use a final proofing, during which a wet dough would simply spread out and flatten. I try my best not to deflate the dough during the roll formation, and have found that it has a surprisingly good oven spring – perhaps another benefit of the minimal amount of yeast, and the extended proofing period.

OK then, for anyone wishing to give my current formula and process a try, here it is:

Preferment:
*14 oz of nut milk (preferably coconut milk – not the kind in cans, use the kind meant for drinking)
*8 oz flour of choice
*a pinch of yeast
Mix preferment well in a small bowl, cover, and allow to sit at room temperature for at least 12 hours or more. Then stir well, recover, and place in the refrigerator for another 10-14 hours.

Final Dough:
*12 oz flour of choice
*2 tsp salt, or to taste
Remove preferment from refrigerator and add the flour and salt – mix well. Liberally oil a proofing tub with a few Tbs of oil, and add final dough to the tub. Cover and allow the dough to proof at room temp for at least 10 hours or more (the total amount of time here is up to you, and depends on how slow or fast your dough is proofing). Uncover the dough and stretch and fold it several times – recover and repeat every two hours during the proofing.

Roll Formation:
Since these rolls will not need a final proof, you’ll need to preheat your oven to 400F about an hour before this step.

At the end of the dough’s last 2 hour proofing, it should very light and airy – gently remove the risen dough to a well floured board or counter. Gently form the dough into a rectangle shape about 12-15” long – using a board scrapper or a large sharp knife, cut the rectangle of dough into two equal long pieces and roll each into a baguette shape. Using the board scrapper or knife, cut each dough piece into as many rolls as you wish (I did 6 each piece) and move to a parchment covered, or greased, sheet pan (I have1/2 size commercial pans on which these 12 rolls fit nicely).

Bake for 20-25 minutes, or until the rolls are a dark shade of golden brown. Immediately upon removing from the oven, brush each roll with coconut oil or butter to add even more flavor and give the rolls a nice sheen. 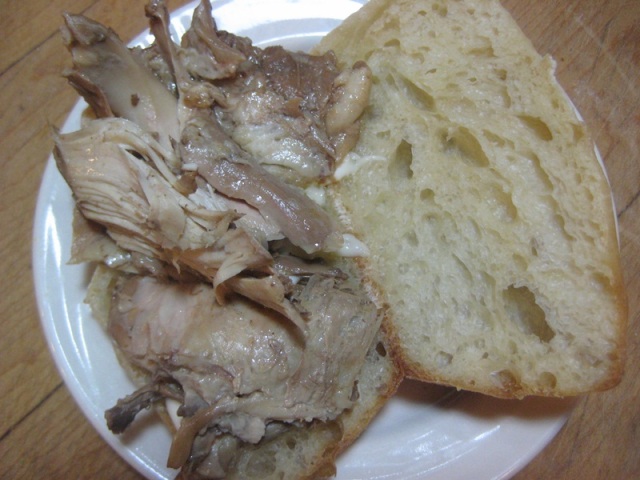 I’m usually a dissatisfied baker! There always seems to be something that I know didn’t turn out as well as I’d have liked – but I really can’t find much wrong with these. I think maybe they’re too good, ’cause I find myself eating more than I should. Are we really put on this earth to live a life of denial of those things which give us pleasure? I think not. As I’ve told you before, the true meaning of life is revealed through out taste buds.

I'm a guy with enough time to do as I please, and that my resources allow. The problem(s) are: I have 100s of interests; I have a short attention span; I have instant expectations; I'm lazy; and I'm broke. But I'm OK with all that, 'cause otherwise I'd be so busy, I'd be dead in a year.
View all posts by drfugawe →
This entry was posted in Baking, Food and tagged almond milk, club rolls, coconut milk, low yeast breads, nut milks, Pre-ferment, slow rise bread. Bookmark the permalink.

23 Responses to A Baker’s Journey: Bread, Time, and Nuts