Does Your Oven Deserve Your Trust? 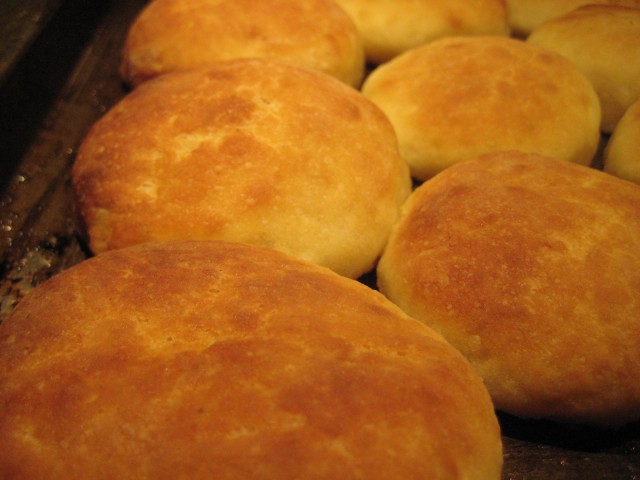 I don’t know about you, but most of the time I go about my cooking and baking adventures with a false sense of confidence that surely I’m in charge of things, and certainly in control of the variables – then something happens that shakes that confidence, and me along with it!

I’ve spent the weekend on a sourdough exposition (those of you who care for sourdough pets will know what I’m talking about) – so far I’ve made three sourdough creations.  This may not sound like much, but when there’s only two of you, you soon get far more “eatables” waiting to be eaten than is right and proper for two individuals to handle.  So, freezers soon to be bulging, and my sourdough pets put to hibernation for awhile.  And in the midst of this activity, I decide that this might be a good time to check the validity of my oven temps – in retrospect, it may be better not to know!

One of my better kitchen gadgets is a probe thermometer – I use it for all sorts of things.  And of course, I can use it to measure the internal temp of the oven – you just lay the probe on a rack, or dangle it if you wish, and measure away.  I’ve also got an oven thermometer that hangs on one of the oven racks, so my thought was “Hey, with three measurements of the oven’s temperature, we’ll either get confirmation, or differing results, and either way, I’ll have the info I need.”

What did I learn?  Well, of course, I didn’t learn what I thought I’d learn – I still don’t know if my oven is hotter, cooler, or right-on the temperature that it’s telling me it is!  But here’s what I learned: first, my probe thermometer is extremely sensitive – maybe even over-sensitive.  When I opened the oven door during my tests, the probe thermometer would register an immediate (instantaneous immediate!) drop of 40-50 degrees!  Could that be right?  Certainly, my other two measurers were not giving me that kind of info!  So, who knows.

Second thing I learned was that I couldn’t trust my instruments.  At one point, my probe thermometer was telling me that the oven’s temp was 25 degrees higher than it showed on the oven display panel, but when I checked the oven thermometer inside the oven, it said the temp was  10 degrees “cooler” than the oven display temp!  Oh Boy – now a new question, “Did I have any instruments capable of measuring the true temperature of my oven?”  This was quickly starting to become more difficult than I was ready for.

But, knowing how questionable is the reputation of “any” oven thermostat, I’m willing to believe that perhaps the probe thermometer is a bit more trustworthy than the oven itself.  And if that’s the case, then there is a third thing to learn here – and that is that all the while that the oven’s own display is telling us that the oven is holding a 350 degree temperature, the probe thermometer is measuring broad swings from a low of 33o to a high of 378 – That can’t be good!

Is it any wonder that I have trouble with consistency in my baking?

So, how did my weekend’s baking come out?  Well, with a little help from my friends, not too bad.  One of my regular blog reads is Wild Yeast, which of course is a reference to sourdough.  Susan is the proprietress of Wild Yeast, and appears to be somewhere between keeping an amateur blog – like mine and millions of others – and sliding over into a professional blog (whatever that is!).  Maybe what I’m getting at is simply a reflection of the amount of time one puts into working on one’s own blog – and I have no idea how some of these folks make their blogs look and read so professional.  What I do know is that at my level of expertise, my own blog will always aspire to a high level of amateurism.  How’s that for a lofty goal?

Anyway – where was I, before I interrupted myself?  Oh yeah, the weekend’s bevy of bakery goods – started out on Friday morning doing some Sourdough Biscuits, pictured above – not really a biscuit, because they lacked any shortening in the mix, but they very well may be absolutely traditional “trail food” – sure are easy!

Followed that by trying Susan’s recipe for Sourdough Bagels.  I used a “build” I had been working on since early in the week.  Those among you who tend sourdough know how good it feels to “build” a “maintenance” sourdough into something aggressive and virulent – something with the ability to give your creations the lift and flavor that we all dream about.  Well, my build was progressing nicely – I was giving it two feeds a day, and each time it’d get active, I’d think, “Wow, every feed makes this stuff stronger – I wonder what it’d do after two or three weeks of building?”  Maybe someday, but now on to the baking.

The bagels turned out nicely, especially in the flavor area, and with a great chewy crust (love that crust when it’s chewy and crunchy at the same time!).  Where they missed was in my skill area – I always seem to forget that you really need to make your “loop” bigger than you think, ’cause it’s go’na shrink on you (see the missing holes in the pic), and then my dough was a bit too dry, and I couldn’t get the ends to seal together (I think my starter was not wet enough).  Last error was that I wanted to use some hydrated dry onion in the topping, and in this application, the oven temp was too high – the onion burned!

But overall, a winner – for me at least.

And then, I’ve had my eye on Susan’s, Sourdough Ciabatta Rolls for some time now.  What was especially appealing about them was that they utilize the fold, stretch, and pull technique with an especially wet dough.  For any baker, especially a novice, this is a challenge – and we all know that the greater the challenge, the greater the satisfaction – so midday Friday found me putting together the dough, and then I realized that I had the timing wrong – here it was 1 pm, and Susan’s instructions were to slip into the fridge for 7-12 hours before continuing – no way I’m going to be baking at midnight.  OK, I’m flexible – but is the dough?  We’ll find out – so in the fridge it went for its 18-20 hour fermentation.

Next morning, I let the dough warm up some, and stretched it out on the bench – no problem at all – the folding process and the fermentation period work together to create a dough that anyone can work with.  And the longer fermentation time did not negatively affect the dough at all, except to make it a bit lighter (I don’t really know that). 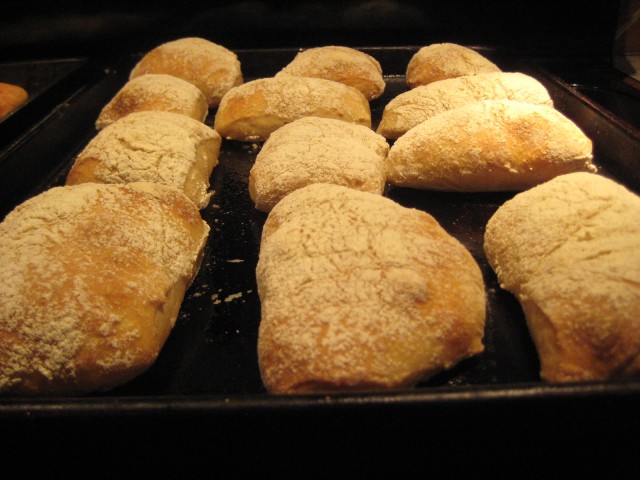 I loved the super-light texture of the rolls, and they still had enough oomph left for a nice oven spring when slipped in the hot oven.  Maybe the shorter fermentation time would give them even more oven spring!  No doubt these were the winners among the trio – Hey, I’m on a roll now, but sadly, my wife is not allowing me any additional kitchen time this weekend.

I’m left with one lingering question, “If I were blessed with a good, consistently true oven, how much better would my baking get?”

I'm a guy with enough time to do as I please, and that my resources allow. The problem(s) are: I have 100s of interests; I have a short attention span; I have instant expectations; I'm lazy; and I'm broke. But I'm OK with all that, 'cause otherwise I'd be so busy, I'd be dead in a year.
View all posts by drfugawe →
This entry was posted in Baking, Fav Kitchen Tools, Food and tagged oven temperature, oven thermostat, sourdough, sourdough bagels, sourdough ciabatta rolls, Wild Yeast blog. Bookmark the permalink.

6 Responses to Does Your Oven Deserve Your Trust?