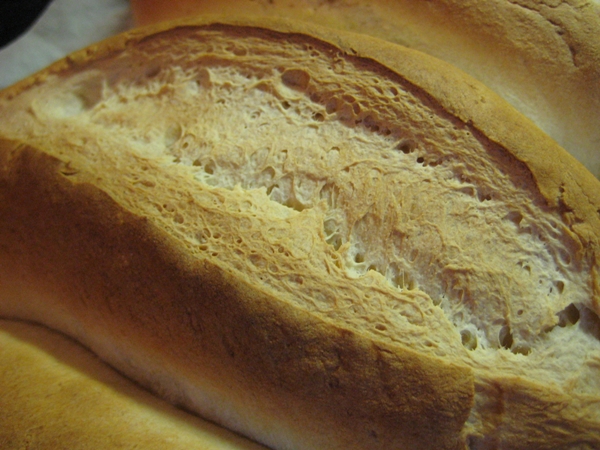 I have an irritating habit – it’s irritating to me, I mean – I’m quite sure I have irritating habits that only others find irritating – but this is one that only I would be bothered by.  I have a habit of becoming challenged by a question to which an immediate answer is not available, and then to be periodically annoyed by the question, until l become re-energized to find the answer to this challenge.  Such an unanswered challenge was my recent quest to find an answer to the question, “How were the real Vietnamese baguettes made during the French occupation of Vietnam?”

You may remember that several months ago I raised that question, and in a partial answer, I began baking some Bahn Mi rolls made with a portion of rice flour in the dough.  At the time, I was not impressed with the results, and vowed to continue the experimental bakings to find a more acceptable baguette.

The baguettes of Saigon are legendary and we know that they contained some rice not only because we assume that wheat flour was an expensive commodity, and rice was common and cheap, and so it is likely that they used as much rice as they could in the baguette dough – we also know this because the Vietnamese bakers of the time have told us so.  And although I have searched for such a classic French/Vietnamese recipe on the internet, I have not found one.  I found plenty of Vietnamese baguette recipes that contain rice flour, and it was one of these that I used for my bakings.  But the recipe I used -with 27% rice flour- did not produce a satisfactory baguette – my guess is that the lack of gluten results in a crumb that does not hold together well, and a crust that, although soft, does not have a chewy texture at all.  This does not make for a good sandwich experience.

At first I thought this was strange – how could the French bakers in Saigon allow something as poor as this to be made in their bakeries?  And how could anything like this become legendary?  And the more I thought about it, the more I suspected that perhaps the rice going into the bread was not rice flour, but cooked rice!  I knew that cooked rice often found its way into multi grain breads, so cooked rice in bread was not unique.  But would that make a difference?

For my most recent bake, I decided to revisit the challenge, and test the cooked rice theory – but of course, I couldn’t just use the same recipe as in my last rice flour baking (nothing like comparing apples and oranges, right?), it’s just not my style.  And since everything I’ve baked lately has been sourdough, I adapted the new recipe to a sourdough leavening as well. 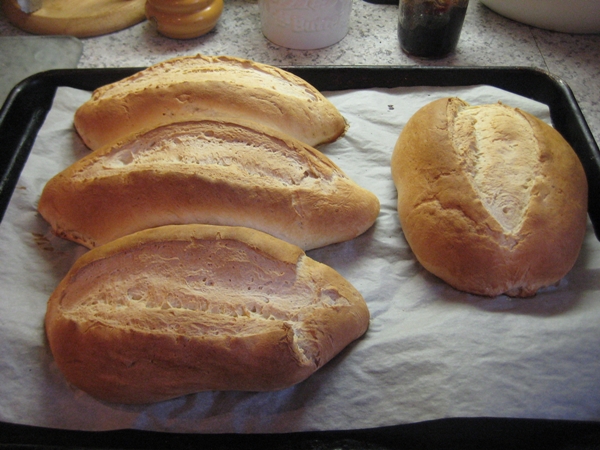 The resulting loaves – I made them more like large rolls than baguettes – are perfect for sandwiches, with a soft but chewy crust, and a  velvety crumb that did not break up as it had with the rice flour bread.  The taste was delightful.  As you’ll note, I still used a half cup of rice flour, but my next bake will eliminate the rice flour completely in favor of a full cup of the blended cooked rice – can’t wait to try that. 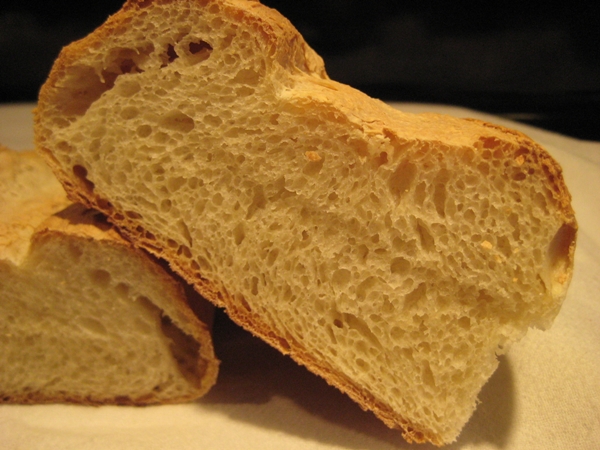 In the meantime, I’d like to suggest that the following recipe will make a quite satisfactory Bahn Mi baguette.  Although I know there are many Bahn Mi shops that are baking their own breads, I’m not sure how many are bothering to use a traditional Vietnamese baguette made with rice, but I’d hope there are some who’d value and honor the tradition enough to bother.  But the beauty of baking your own breads is that even if few others are baking a particular type, a home baker can enjoy breads that simply are not obtainable commercially – and how neat is that?

Prepare the levain by mixing:

Allow the levain to stand on the counter, covered, at room temp for 8-12 hours, or overnight.

The day of baking: 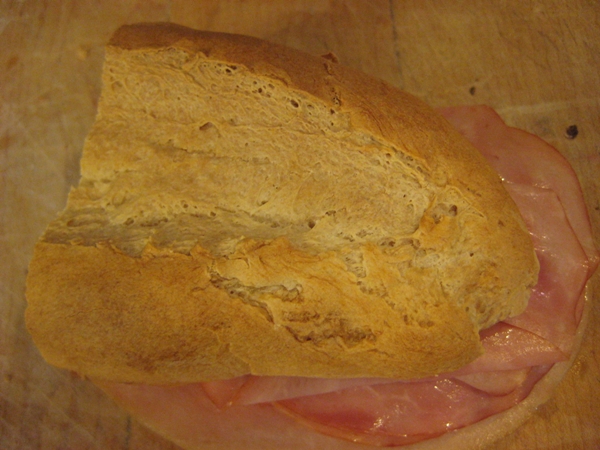 If you want your rolls to be even more attractive, you may want to sprinkle them with flour, or brush them with warm milk, after they are fully proofed but prior to slashing – but I think they are pretty just as they are with further adornment.

I’ll be sending this to Susan at Wild Yeast for the next round  of Yeastspotting.  Lot’s of great breads show up there weekly – check it out.

I'm a guy with enough time to do as I please, and that my resources allow. The problem(s) are: I have 100s of interests; I have a short attention span; I have instant expectations; I'm lazy; and I'm broke. But I'm OK with all that, 'cause otherwise I'd be so busy, I'd be dead in a year.
View all posts by drfugawe →
This entry was posted in Baking, Food and tagged Bahn Mi rolls, rice flour in bread, rice in bread, sourdough baguette with rice, sourdough Vietnamese baguette, Vietnamese baguette recipe, Vietnamese baguettes, Vietnamese French bread. Bookmark the permalink.